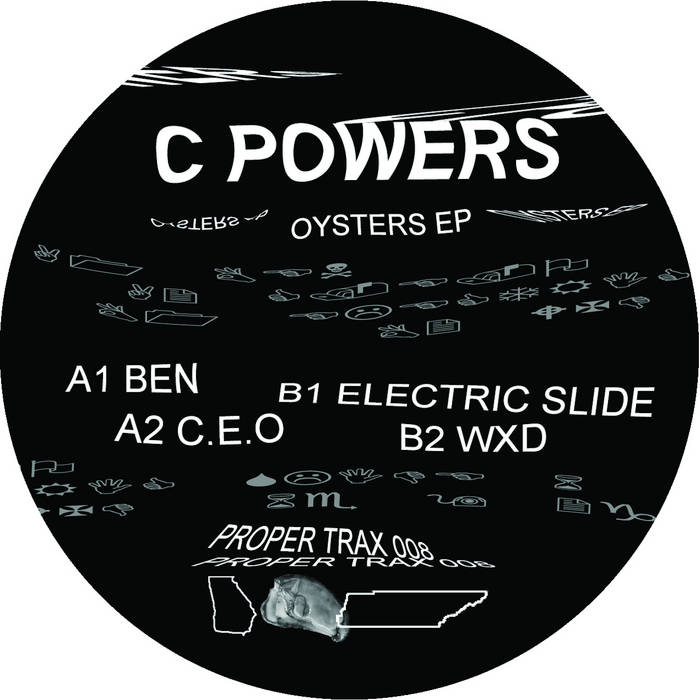 This is the story of C POWERS. To understand OYSTERS, you must understand the man behind it all...

Abandoned at the island nation's only beachfront techno club as an infant, young Christoph (C POWERS) was adopted by the club's owner, Geraldo Powers. During Geraldo's time as a naval officer, he traveled the world throughout rave's formative years, secretly going to the underground parties when arriving to European ports after having originally fallen in love with early house music as a teenager in his native Chicago via roller-rink parties and the legendary Music Box headed by Ron Hardy. Rear Admiral Geraldo, outed as a gay homosexual during the discriminatory days of Ronald Reagan's U.S. military, was forced to retire, but spared a dishonorable discharge thanks to his roster of medals earning during his exemplary leadership for the invasion of Grenada in 1983.

Throughout his three year stay at the local naval base, the now 30-something Gerry Powers had been struck by the natural beauty and unsettling mysticism of Guam and its peoples and made the choice to permanently set up shop on the island after his unexpected retirement. Taking his partner and newly-crowned Supreme Butch Queen of the New York vogue circuit--Amadeus Lector--with him and financed with $6669.69 in prize money, the new era of DAS POUNDHAUS LTD. was to begin.

In 1990, Gerry founded the notorious Guamanian club DAS POUNDHAUS (the name of which was strongly influenced by a two-week long ecstasy and Polish speed-fueled bender during 1989's inaugural Love Parade in West Berlin). Located inside a decrepit lighthouse originally built during Spain's reign over the island, the club played host to a steady stream of closeted, Pacific-touring U.S. military personnel and later, the party-craving barons of the dot com bubble. Outed in private usenet circles for its off-the-charts hedonism, the club's infamous parties would inevitably lead to its perilous demise, and the eventual deportation of Gerry Powers and his family to the mainland.

But there was one thing that could never be taken away from them...

You see, young Christoph was diagnosed with the "disorder" as a pre-teen after having been exposed to nearly a decade of DAS POUNDHAUS first-hand and at such a young age. The youngster was like a fish in water during his childhood in Guam, but when the family was deported in 1999, he began to show signs of anxiety and depression. His ability to hear colors and see sounds had simply turned into a stream of incomprehensible, uncontrolled static. He was now a pariah among his peers. Shunned and admonished. Assigned to sit by himself during school lunch. One of "those" kids.

By this time, his two dads' relationship was on the rocks and would quickly unravel. Amadeus, frustrated with Gerry's incessant ramblings about bunkering in Montana because of the Clinton-Illuminati conspiracy to enslave the middle-class, decided to leave Gerry in an attempt to become a backup dancer for Madonna during her "Drowned World Tour" in 2001 (which would have provided a significant sum of financial security to the family, considering their life savings had been destroyed thanks to the toppling of the NASDAQ from its peak of 5048 in March of 2000--and thanks to those dot com baron stock tips, the Powers were all-in). However, Amadeus' unflinchingly "authentic" vogue style was considered obsolete, and he would go to die in a Reno Motel 6, a victim of drug abuse and that kind of thing apparently.

Young Christoph contacts PROPER TRAX via E-mail.
he wonders what is going.?
Will azader: "sure, stuff, cool stuff, i promise. what u into?"'
chris says - mna, that's pretty fucking rad bro. i live on the beach in savannah dude. it reminds me of my home in guam. anyway here, check this, tight, promise.!!"
proper trax chimes in: "uh yeah, let;'s kick it for awhile, mb like 3 years or something? how bout it?
cc_ retorts - "yeah, kool, im patient, let's smoke some of this, and then head 2 the beach and slurp"
alex flk exclaims: SLURP1?!
Will Z: "OYSTERS IN THE HALF SHELL SON!!!!!!!!!!!!"